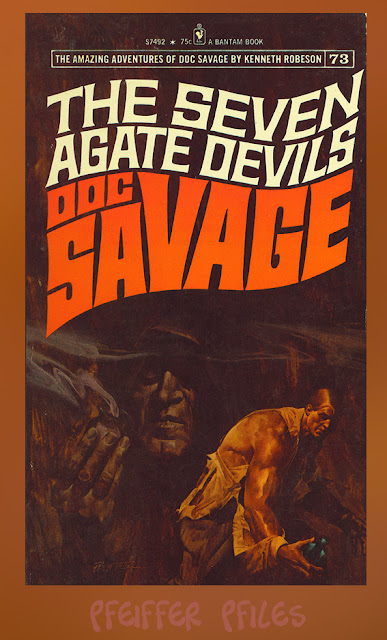 Fred turns in brilliance for his 6th Doc Savage offering.
Doc is depicted as a much deeper character than the
normal statue against evil. Fred varies from the
formula a little and reminds us that Doc Savage has
that protean genius along with the superhuman strength.
Fred more than once showed Doc Savage in deep thought.
and somewhat vulnerable.

SP
Posted by Fred Pfeiffer Artist at 9:09 AM

This looks like this pose for Doc came from the same set as Metal Master. Doc slinking along looking like he could rip your head off. I love the color of Doc ... he really pops out of the cover.

Trilling is in the air. I can hear it.

This cover is full of mystery and menace. I love the smoke wafting through the air and the cowled person. I also like the all-brown and bronze cover with the little spots of blue on the statue that draws your eyes to it.

It's probably just me, but it seems to me that Doc's head is just a tad too small for the body, as I also thought was the case with The Black Spot cover, but I still love both covers nevertheless.

Fred told me that he studied the art styles used on covers of paperbacks from the 40's and 50's, especially the pulps, and I still remember from the notes I had made on our conversation, that one of those pulps was PHANTOM DETECTIVE. The background used for this cover strongly suggests an influence from his study of the Phantom Detective covers early in his art training. A great many of those old paperbacks would've been much easier to find in used book shops back in the late 50's and early 60's.

Pfeiffer on the Cover Cover

Yaa Mon Come on Down..

Quest of the Pfeiffer

Flesh in the Furnace

The Nature of the Beast

I came, I saw, I conquered.

Pfeiffer On the Cover

Pfeiffer on the Cover

One for the Ladies

Cooler Than the Silver Surfer

Not SO Hot Pfeiffer Lady

Flight of the Falcon