by Lester Dent writing as Kenneth Robeson
Fred created one of the most unusual and thought
provoking covers of the Bantam Doc Savage Series
with this cover. Doc Savage alone with his thoughts. 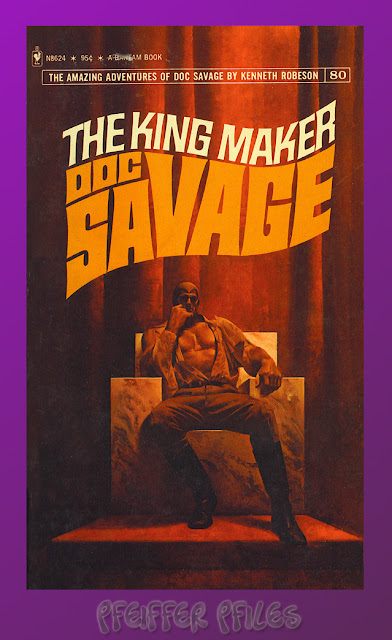 I think this is my favorite of all the Doc Savage Covers
in the series. It's my favorite one by Fred... Pfeiffer did a 180
on what had come before. Fred was criticized by some Doc
Savage fans for not showing Doc Savage as the giant killer,
the tough and ready for danger character that James Bama
rendered on his covers. I have even read that some fans thought Fred
showed Doc running away from danger on most his covers.
I never saw them that way at all. This cover would not be my favorite if
James Bama had not shown Doc as he did on all of his covers. I never
forgot that Doc Savage was a super hero. The King Maker cover made me
feel more than ever that Doc was up against something horrid, maybe more
so than ever before. I know this cover will prompt some comments. I am sure,
I will have more to say about it.

I always though Fred's Doc was a man of thought as well as action. I definitely got the feeling that his Doc was as apt to think his way thru as well as fight.

I totally agree with you Stan. Sometimes I think some to the Doc Savage Fans never read one of the books.

This is a magnificent cover. It not only shows all the different facets of Doc Savage from the brawn to the brains and everything in between, it also makes you very interested in the story. Is Doc the King Maker?

And there is alot of the famous "The Thinker" statue in this one.

What a high point to leave the Doc series with.

Pfeiffer on the Cover Cover

Yaa Mon Come on Down..

Quest of the Pfeiffer

Flesh in the Furnace

The Nature of the Beast

I came, I saw, I conquered.

Pfeiffer On the Cover

Pfeiffer on the Cover

One for the Ladies

Cooler Than the Silver Surfer

Not SO Hot Pfeiffer Lady

Flight of the Falcon